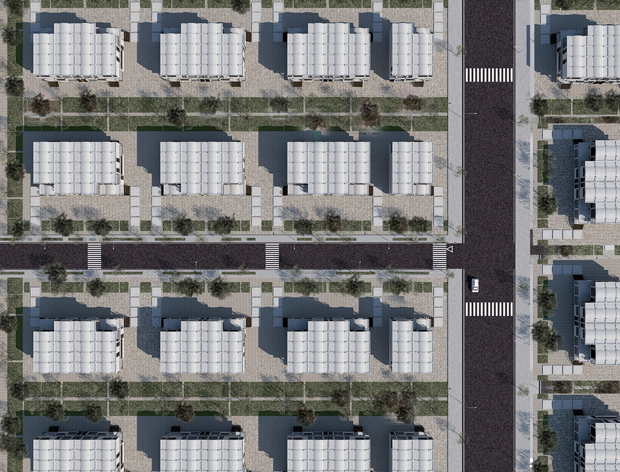 right
The policy of mass housing construction in large promotions generally occurs in countries with moments of strong economic growth and high demand for social housing to meet the recurring shortages of high population growth and migration to cities and to combat the spread of substandard housing as a solution of residence.

The existence of a strong lack of housing has led, therefore, to the need for effective and rapid responses in quantitative terms to accommodate these demands in short periods of time.

Taking the example Brazil, historically in the first place, the construction of the first housing complexes was made based on the type of houses, due to:

The implementation of houses in slums, grew through the occupation of organized horizontal spaces and from the perceived need for small clearances.

In general, areas for institutional use or service were not reserved at this early stage, because the legislation did not demand that and there was no possibility of obtaining financed resources.

Continuing with Brazil, in the municipality of São Paulo, for example, in addition to the predominance of large developments in other neighboring municipalities, you can find some promotions where the number of houses built reaches proportions of real cities.

The standardization extends from the attachment of model plants for the production of houses, until the establishment of the different possibilities of groups previously established for standard multifamily buildings.

In the distant periphery only single family homes are built, due to cost reduction by cheap land, and the repetition of types and materials of construction employed.

The change of clientele and scale of the promotions, which have affected mainly the production of social housing in São Paulo, from 1975, entailed the need for development of new building technologies, mainly the prefabrication and also the use of new materials in order to reduce costs.

It is in this sense that the concept of OBOX industrialized housing building acquires its full meaning. The OBOX construction system allows mass implementation of family housing (or collective houses too) to replace substandard housing.

The images that are leading this article correspond to solutions for Panama, Honduras, South Africa and Guinea.

One Response so far.